Take Care of Your Teeth, Take Care of Your Heart
Cleaning your teeth often, every day, is linked to a lower risk for heart problems. A new study found that brushing your teeth several times a day resulted in fewer cases of heart failure and atrial fibrillation— the term for an uneven heartbeat.
Heart failure happens when the heart cannot do its job of pumping blood through the body.
What the research found is that brushing your teeth three times a day, or more, was linked to a ten percent lower risk of atrial fibrillation. It was also linked to a twelve percent lower risk of heart failure.
The study was published last Monday in the European Journal of Preventive Cardiology.
The researchers examined information on more than 161,000 people in Korea with no history of heart problems.
They followed up ten and a half years later, and found that three percent had developed uneven heart rhythms and almost five percent had developed heart failure.
All the participants in the study were part of the Korean National Health Insurance System, and aged 40 to 79. They had usual medical exams between 2003 and 2004. Information was collected on their height, weight, laboratory tests, sicknesses, and lifestyle. They also noted their mouth health in connection with cleaning. 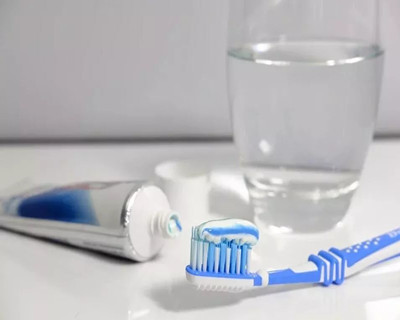 Heart and teeth health connection
You may wonder, how are teeth health and heart health connected?
Earlier research suggests that not taking care to clean and brush teeth leads to bacteria in the blood. This can cause inflammation, and increases the risk for unusual heartbeat and heart failure.
A study last year by the American Heart Association showed that brushing your teeth twice a day for at least two minutes may lower the risk of cardiovascular, or heart, diseases.
That study looked at a smaller group of fewer than 700 people. The AHA said that the researchers found that people who brushed less than twice a day for less than two minutes were three times more at risk, compared to those who brush at least twice a day for two minutes.
Gums are the soft tissue structure that hold the teeth. They need to be cleaned as well. Experts say if gums are not cared for this way they can become inflamed. They say there is a connection between such inflammation, and future heart disease.
The lead investigator of the new study is Tae-Jin Song, a doctor and professor at Mokdong Hospital at Ewha Womans University in Seoul, South Korea. He noted "we studied a large group over a long period, which a﻿dds strength to our findings."
But he said that the research was limited to one country and as an observational study does not prove causation.
The American Dental Association agrees. The organization said "this study is interesting, and while it may suggest an association between tooth brushing and heart health, it does not show a direct connection."
To have good oral health, the ADA advises people to:
Brush their teeth twice a day for two minutes each time with a fluoride toothpaste
Clean between their teeth once per day
Maintain a healthy diet
See a dentist regularly
Mouth care companies have taken note. Some manufacture electric toothbrushes programmed to run for two minutes. That way, people do not have to watch the time while brushing their teeth.
I'm Anne Ball.